This May, U-he released the 1.1 version of their esteemed ‘Dynamics Processor’ plug-in Presswerk. There’s been a fair bit of hype surrounding this device since its release last December. Already a favourite amongst some of the staff we were intrigued to see what the update has to offer and at last give the unit a run for its money. So without further ado, here’s the low down on whats new in version 1.1 and why Presswerk might just become your new favourite digital compressor. 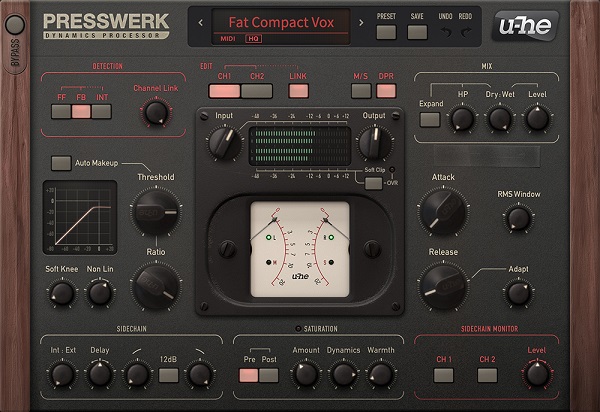 First off, Presswerk looks great. It feels like a quality device, is well laid out and is as apparent about each knob and buttons function as any device could hope to be. Clearly a good amount of care went into a design aesthetic. When using it one can rather imagine the feel, the mottled surface of the painted metal front panel and worn dials. Visual feedback is tasteful too with the push on the rubber, illuminating buttons and the lively vintage style VU meters. This effort is furthered in the new addition of customised ‘Special View’ interfaces, each styled for their purpose nicely.

U-he have included stripped down interface skins for general purposes such as drums, vocals, and bus treatment for instance. As with the majority of their other synths and processors U-he have employed an effective one-screen, no clutter, no menu diving, approach to layout and these views stick true to that ethos nicely. 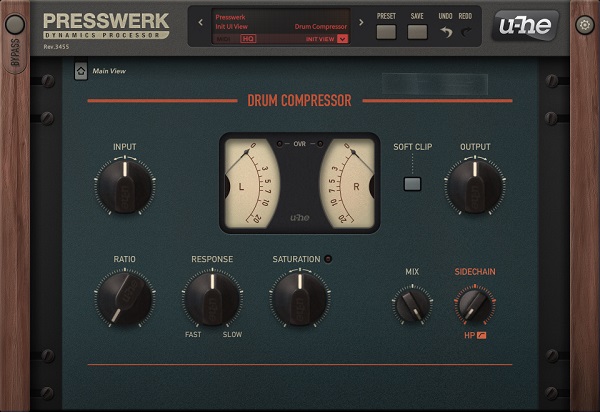 Worthy of a mention also whilst we’re on looks is that the interface can be scaled down to 70% and up to 200% to cater for your screen size, which is a welcome addition when in my case reviewing on a 15 inch macbook pro. As well as that, the brightness/gamma can be changed, presumably to compensate for room brightness or those late nights staring at the screen – although surely one would adjust the entire monitor brightness if this was a concern? Anyway, a nice touch non-the less. These are small details but make for an impressive first look and contribute to a convincing over-all sense of quality.

In terms of ease of use the interface behaves and reacts with the right amount of visual feedback with the control display indicating in precise terms – percentage, db etc – exact amounts as one edits. This panel also allows access to the new Special Views and opens up a variety of excellent presets, which i’m pleased to say U-he have expanded on since its initial release.

As is the norm with U-he devices these also come with a brief explanation about the best approaches for using each one which provides also a valuable learning method for those newer to dynamics. This effort is mirrored in the in-depth manual, which not only explains operation but also gives a handy background on the thinking behind certain features and under the hood diagrams. Informative video tutorials on their website complete the philosophy that these high end plug-ins are made with in-exclusivity in mind.

In terms of sound, Presswerk is one of the nicest sounding digital compressors I’ve used. It adds weight and punch to parts superbly with very convincingly richness and analogue tonality.  U-he themselves boast of its ‘musical soul’ and they are right to do so – the time spent studying the classic hardware devices that it largely references (the likes of the Urei 1176, Fairchild and LA2A) clearly paid off. Sweet spots sing, and even harsh undesirables from over compression become warm and tonal. Dialling down the threshold at a high ratio for instance produces the warm kind of audio response that one might expect from vintage analogue. 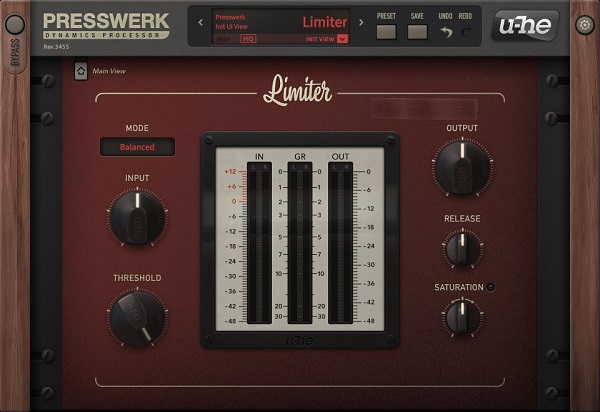 U-he Presswerk is not however, just a hardware emulator, its breadth of capabilities as a virtual instrument, coming with an arsenal of deeper functions, makes it a flexible device for a range of applications. Some of its extra functionality includes a choice three detection modes, FF, FB and INT. The latter intelligently melds the accurate but less forgiving feed forward mode with the more automatic, ‘softer’, analysis of Feed Back mode: A general purpose ‘best of both worlds’ option which allows precise compression on dynamic material with a maximum compression ratio of 5:1 and the convenience and more traditional sound of an FB system. There are MS Compression options too, formally the stuff of high-end professionals, where mid and side channels can be compressed separately, is now easily available to us mortals.

A side-chaining section can work with an external signal or the one coming into the plugin as well as allowing for blending between the two. This comes with full controls for high and low pass on the trigger signal with a default 6db filter slope and the option of 12db for more surgical adjustments. This feature comes with a handy side-chain monitor as well for auditioning the signal.

Onboard saturation controls allow for colour to be added (post or pre compression). Interestingly and quite uniquely, rather than just add or enhance, Presswerk allows one to control the amount and feel of the natural harmonic distortion in the compression or the ability to almost remove it entirely.

Finally, as already indicated, the recent upgrade of 1.1 includes six streamlined Special View options with custom panels – Drums, Vocals, ‘Easy’, MS Compression, Bus Group Compression and a Limiter. Whilst proceedings under the hood are exactly the same, these are set up to simplify the process when dealing with common targets by doing away with unnecessary controls or intelligently configuring them as best for the source.

For example on the vocal device, attack and release, which can often be difficult to balance manually, are replaced with a ‘Response’ control which adjusts both in a manner tailored for such a signal. These modes make for an improved workflow and will help less experienced producers get great results fast whilst those looking for deeper tweaking can make a quick switch back to the main interface, making full functionality available again whilst keeping changes made in the previous mode.

I feel like i’ve done nothing but sing about Presswerks in this review but I honestly can’t find anything I didn’t like about it. Its a concise and extremely versatile processor that easily rivals emulators many times its price, as well as holding up exceptionally to the sound of real analogue with the type of detail and control only available through a digital device. At a very reasonable price of $129 (works out around £100 once you add on VAT) there’s no reason why every home studio shouldn’t have one. Interested? Find out more and buy your copy direct from the U-he website. 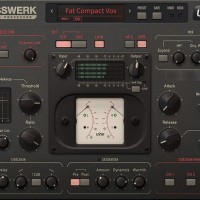